Tyche was a proposed mystical giant planet orbiting in the outer Oort Cloud. Possible data on the region thought to contain Tyche was gathered by the WISE Space telescope and was compiled and analyzed by March 2012. Tyche had been speculated to dislodge comets from the Oort Cloud.

Planet X is a proposed mystical giant planet of 4 times bigger than Jupiter.

Tyche has been ruled out by a WISE survey in 2014.

In 1999, Daniel Whitemire found "evidence" of a 10th planet lurking out in the outer Oort Cloud by seeing comets getting dislodged from the Oort Cloud. When Pluto was reclassified as a Dwarf Planet in 2006, Whitemire changed it to a 9th planet. Then, in February 2011, the internet was abuzz about new possilbe data found of Tyche. 2 months later, more data was released and all the data is still being analyzed. All the data will be completely analyzed on March 2012. Tyche should indentified soon after the post-cryo data gets released later this year. If Tyche exists, it will be discovered in either late 2013 or early 2014 and the IAU will have to choose a now name for this Planet X. Whitmire and his colleague Patrick Whitman believe Tyche has been captured by WISE (right).

Whitemire states that Tyche dislodges long-period comets from the Oort Cloud and Tyche may also the tilted orbits of 2006 SQ372 and Sedna, although this is still inconclusive. More details of its gravitational pull are unknown as of now.

Tyche has an orbit that is at average 500 times further out than Neptune.  It orbits in the Oort Cloud but may sweep into the Sun's bow shock for a very tiny portion of its eccentric orbit. It's gargantuan distance from the Sun (the only main planet outside the Sun's termination shock) and its orbital inclination of 44 degrees means it stays out of the Zodiacal band for its entire 1.8 million year orbit.

The common speculation is that Tyche is more massive than Jupiter, probably 1-2 Jupiter masses or even 4 Jupiter masses, and has an atmosphere much like Jupiter. Another guess is that Tyche glows in the visible spectrum. Some even guess that Tyche has "antlers" or "horns". Scientists would like to mount a space probe to Tyche, but the mission would take around 43 years. We can wait for Voyager to reach Tyche, but by the time he gets there, he will no longer be able to power his instruments as they will be in a dormant mode. 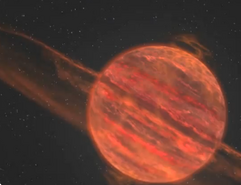 A view of Tyche and its possible rings. 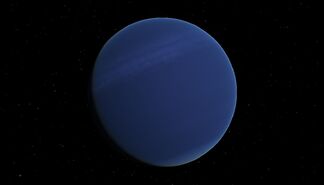 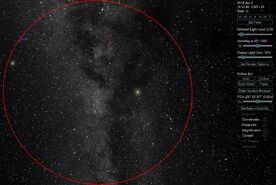 The 44° tilted orbit of Tyche.

Community content is available under CC-BY-SA unless otherwise noted.
Advertisement